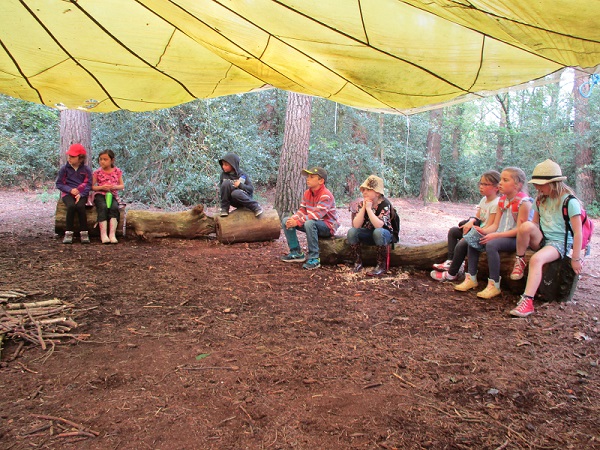 Excitedly we woke up and sprang out of bed!  This was it!  The day we went to Carey Camp!  The curtains were flung aside and we peaked out into the morning light.  The sun was shining this was going to be amazing.

With a huge cheer we arrived, we unloaded the coach and the tour began.  These are the tents, this is the woods and these are the shelters we will use if it rains.  Rain!  It wouldn’t rain! It never rains when you go camping!

The bags unpacked and the beds made, it was time to begin our activities.  Some of us were off to the huge traverse wall, others were feeling their way along the blindfold trail.  A few of us were testing out the archery range and a lucky few were building shelters!  Muscles were being tested, brains being used in different ways and friendships were being examined!  Everyone was having an amazing time, and then it happened!  The ominous rumble of thunder, the sudden drop in temperature and the rustle of rain hitting the treetop canopy.  A drizzle?  A shower? A passing cloud?  Nope it was a tropical storm, a downpour, a magnificent thunderstorm!  Now I know what some people were thinking, (Miss Capon) time to pack up, call the coach back!  But the children were having none of that.  We were staying, we didn’t huff, we didn’t puff, we weren’t moaning and we certainly weren’t groaning!  The water proofs went on and we got stuck in! Yes we were muddy and soggy but we were having a great time.  The sun came out, we lit the campfire and sang some songs.  We made story sticks and had hot chocolate then got ready for bed, a nice long sleep was just what the teachers ordered!  The teachers tucked themselves in and settled in for a peaceful night!

4 o’clock in the morning and EVERYONE was awake! Fantastic, thought the teachers an early start!  But the sun was shining and everyone was raring to go explore another day in the forest.   Tents were cleaned, bags were packed, smiles were on faces and then…..the heavens opened once again.  But the smiles stayed and a plan emerged.  What better weather could we ask for building shelters!  An instant method of testing our structures!  Visibility was down to a few meters but morale was sky high!  The morning soon passed and the sun came out, sandwiches were consumed and the journey home began.  Fondly we waved goodbye to Carey and the team, “See you next year!” we called as we boarded, “Bring some sunshine!” came the reply!

There are no upcoming events at this time.